While I love writing (I journal weekly-ish, make lists daily, and jot down goals often on a dry erase board, etc) this whole blogging thing is kind of time consuming. And I hate that excuse “I don’t have enough time.” Because it really means “it is not a priority…right now.” And that purely has been the case. While I love to share–> restaurant tips, real estate, worst dates and the like, it can take some time to write these things down, ya know?! But I figured it’s time and I was in the mood….so here goes..

To get started: I was going to write about some of the good reads I have had this year…nah. My recent trip to Colorado..nah. Or how about a post on how I am trying to not use the word (or excuse) “I’ve been so busy.”

“Why don’t you blog about dating anymore?”

“You should write about your bad dates again, that was funny.”

But let’s be real. No one gives a shit about what books I am listening to on Audible to try and self improve…ya wanna hear the dating struggles, I get it. So while I don’t have my top 5 worst dates of 2018—(hmm have I even been on five dates this year?)

The reason I haven’t blogged about the ol dating life is simple…a few reasons:

While those above reasons are semi-true, I figured I would take some time to share some revelations/realizations/advice I have been trying to apply to my personal life in the last few months.

First off I would like to say the recent read that I do recommend (single or not) is called: Attached. It opened my eyes to a lot about already self aware self, but also about others who are basically not a good match/wasting my time. But it can be applied in other ways besides dating. It is based on attachment style theory, categorizing people as: Avoidant, Anxious and Secure. And I found it interesting and worth the read.

They also mentioned it on the U Up? Podcast I listen to, right after my therapist had also brought it up–so I figured it was meant to be. 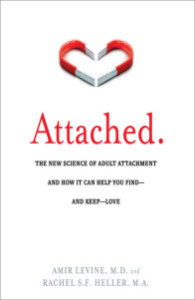 (This book is about Attachment Style Theory-read it).

Revelation Number One: Say What You Want

I know some pretty awesome people. And some of the people I envy are pretty damn selfish with their time and tend to get what they want. My old view of this is that they were picky or selfish or bitchy, but as I have gotten older I realized—It does not make a woman a bitch to say exactly what she wants. Why the f do I always order the burger as is and pick off everything? Because that’s how I was raised and I never want to “inconvenience” anyone. A mild example–but you get my point.

As I sat across from my therapist explaining to her about another frustration in dating, she brought to my attention…”How is he supposed to know you value ___if you never tell him?”

And well, she made a good point. I left this blank because there are endless things that can be filled in that blank (amIright?)…chivalry is a big one for me (yes, yes I can take care of myself fo sho, but something about a man going out of his way with good manners and nice gestures to show he’s interested–call me old fashioned, I don’t care). Anyway, she would give me examples, of how I could word a statement to inquire his thoughts on something important to me, but also state what I want–and to be honest, the idea of it, still makes me cringe. I would usually always counter back with–“I can’t say THAT!!!” {Plus, do you know how indecisive I am?!?! But that’s another topic for another time}

I am not saying I am any better at this, but a work in progress, definitely have improved by speaking up a bit more. It can also be applied to other areas in life (and there’s definitely a way to word what’s on your mind without offending or coming across like a total Bia) but you sure do get a lot farther this way vs playing guessing games and having false expectations I suppose. 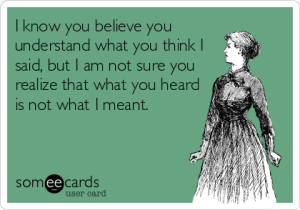 After reading “Attached,” there was a line in the book that talks about often times the people that would be a good match for me are often mistaken for “boring” after meeting them.

This hit me hard. I cannot tell you how many dates I have gone on, that I said, “He’s nice, just kinda boring.”  Maybe I live in a fairytale world, but I was really expecting some kind of butterfly feeling when I met someone (and I have had it before, so perhaps determined to feel it again)? If ya know me–you are probably thinking–everyone is probably too boring for you, crazy girl! And yes, it is true. I am always on the go with a ton of energy and like to keep things pretty interesting and challenging for myself…I have no clue why, but I am owning it. Keep up.

This part of the book made me ponder the “Do I need that butterflies feeling for someone else?” Or can things slowly grow?? Which lead to a constant polling of women–from my married Air Bnb house guests with late convos on the back porch, co-workers, friends, engaged…dating for 4 months…everything in between—I would ask:

“When you first met ____insert significant other___, did you like know you’d be together or did it slowly grow into something more?!”

Here’s some of the answers from my “research”:

He definitely grew on me.

I almost didn’t go on a second date with him, but my sister talked me into it.

The skeletons were out of the closet around date four, and I knew I could be myself around him.

I liked him the more we hung out, but not really at first.

He treated me better than any guy had.

I broke with up with him, and he kept being persistent and told me we would still date.

Now, don’t get me wrong. Some women (much fewer) said they hit it off from the get go, but majority rules here–and I am applying advice from a friend’s sister who said-“give it three dates.” This is something I have been attempting to explore my own self, but let’s just work on getting one date first, huh?

This also correlates to my blog after I read Aziz Ansari’s Modern Romance too. He explains that as a society we are always wanting 9s and 10s and five star reviews, and that really no one is themselves on date one, so if it is a 5/6 or better, go again, and if date 2 is a five or better go again..and so forth, as things tend to grow. The swiping apps keep us always looking for the next best thing vs getting to know what is right in front of us. 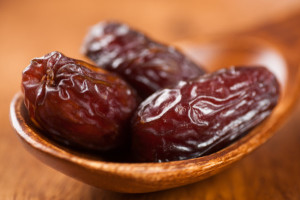 (see what I did there? Three dates….ha)

Now, the above revelation is a good rule, however there is one thing this past year that I also keep (trying to) listen to…it is loud and we push it away a lot (or at least I do).

it is your gut.

So this contradicts a bit of rule number two, but not really.

I once had gone out with a guy a few times that I had the “butterfly” feelings for (which I now understand, from “Attached” that was only me being anxious)  about an attractive guy that pretended to like me, but there was a definite gut feeling that he wasn’t all that great…and I thought something was off.

I texted my friend whose husband is a cop and asked her if it was possible if she could run a background check on him for me. If that isn’t a gut feeling I don’t know what is.

Her answer was pretty perfect “Ha no, we can’t do that, but if you are asking that’s probably not a good sign!”

And yes. He was shitty. So I moved along.

Someone else I know posted a “trust your gut” story the other day to share with friends. She had a weird feeling before she left her house to go for a run–as if she should have taken mace or maybe not even go on a run that am and sure enough she had a bad run-in and the story ends with a man chasing her and she was fearful for her life. Her point was basically–to listen to yourself. We are more intuitive than we give ourselves credit for.

I fight it often myself.

My trust in people is strong, and I try to give the benefit of the doubt. I find that often the signs were there, I really wanted something to work out or perhaps I try to tell myself that I expect too much or want too much–not so. Our gut will let us know what we are willing to excuse and what we are not. 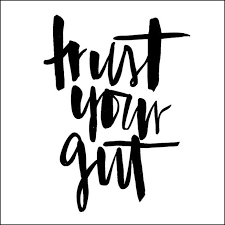 Anyway, I hope you found my “recent revelations” (for dating and/or life) applicable to your own. And maybe even a new read/listen. Trust your gut, give it a chance…or three and don’t forget to say what you want (it’s ok to pick the restaurant).